Eventzee was used for a wellness event that emphasized fun and Penn State University history. The event was held on campus during common period, a 2-hour time frame when no classes are scheduled on Tues/Thurs. The clues and tasks were placed all throughout campus for students to complete within the set time frame.

“The feedback was very positive. All expressed interest in attending next year, as we want to make this an annual event. I believe mostly the app added fun to the process. Most students took it very seriously and were quite competitive. Hopefully it also helped increase awareness of our services and tips on maintaining/improving wellness.”

“Snap” the Rooster- Rooster Cogburn was a cowboy that used to drink too much and would “drunk ride” his horse home. Now he uses Uber, and is waiting for his ride in a very accessible area of Olmsted. Find Rooster and take your most creative “horse-riding” picture with him while he waits!

Hail To The Lion!- We Are!…all about the Lion. Head to the Lion Shrine and take your most creative and silly selfie or team pic to be shared at the end of the race.

Game Day- From billiards to Foosball, students can unwind AND lay some smack on their friends at the games available in the SEC. According to the U.S. Air Hockey Association, how many points does it take to win an air hockey match? 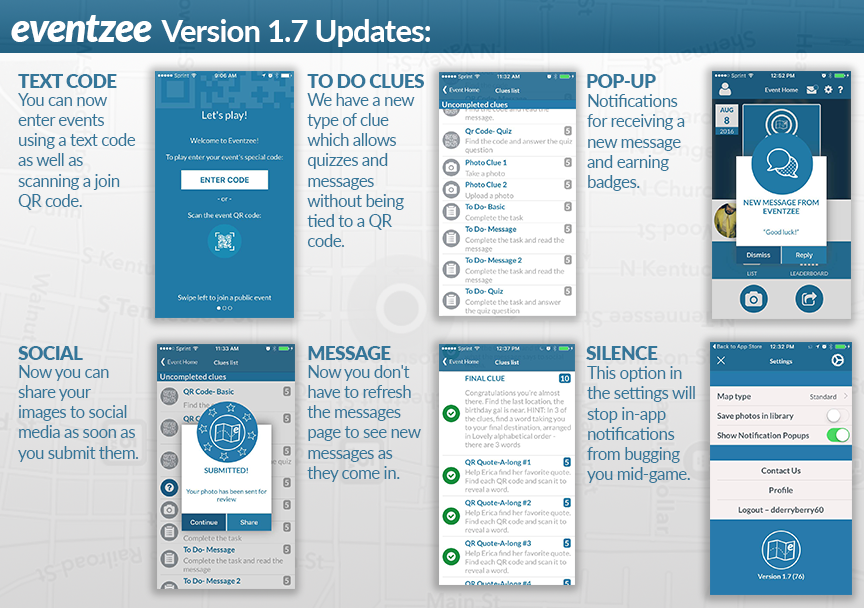 We’re proud to announce the release of Eventzee 1.7 for Android and iOS devices. This new update is one of the biggest updates we’ve done since launching the app! We’ve introduced a new clue type, changed up some features to make your experience even better and fixed a few issues. Download the update today!

Be sure to join this weekend’s free photo scavenger hunt to test out these new features. To join these hunts, just find the Weekend Warriors event on the Eventzee in-app calendar and RSVP, scan the week’s join QR code OR use the new text feature and type in “WW72” to join. If you’re interested in hosting your own Eventzee hunt please contact eventzee@munzee.com and we’ll get you set up with the right package.

The new Library Upload option is mostly for private clients, but our weekend photo scavenger hunt will see clues from time to time use the option. For example our #ThrowbackThursday clues will now be upload available. So instead of taking a photo of a computer screen, you can upload the photo straight from the app. It is still important for the integrity of the game though that photos are taken in real time, so this upload option will not be available for all clues.

Checkout the video below to see how it works:

We’re proud to announce the Eventzee Version 1.5 update for Android and iOS devices is now available. We’ve introduced a new type of QR Code Clue and worked out some UI/UX issues. Download the update today!

Scavenger hunts have always been a fun way to interact with others and support camaraderie, but we’ve moved past the limitations of pen and paper. Eventzee takes scavenger hunts to a whole new level by supporting worldwide events and new ways to interact with players. While Eventzee makes it easy to host your own scavenger hunt, it’s up to YOU to make it memorable. So if you’re considering putting on your own, here’s a few tips to get you started.

While photo hunts are totally fun and encourage social interaction, QR Code scavenger hunts can be used in a number of educational ways. When hosting your own hunt you may choose to use QR clues, which can be converted into a quiz or a GPS clue as well. GPS clues are especially handy if your hunt is throughout a city or campus with distinct locations. Topographical Tourists
Eventzee GPS Hunts are great for showcasing unique and unknown parts of your town or city. Whether it’s historically important locations or simply a map of local restaurants, adding GPS coordinates to a clue is a fun way to get players exploring the places around them. Each clue’s location also shows up on the Eventzee map so it’s perfect for tours of all sorts.

We’ve Got Spirit How About You?
It’s not easy to get around campus your freshman year, but an Eventzee GPS hunt can be a fun way to help educate new students about their surroundings. Map out financial buildings, sports complexes and more important locations for your campus. You can even attach quiz questions to each location to test new students knowledge about the history of each building.

Late Night Latitude
Planning a night out? Pub crawls are a great social activity that double as a way of exploring a city’s unique nightlife locations. Get a group together and schedule out your whole night with Eventzee. Check in at each bar with GPS clues, then include fun photo clues to make the night unforgettable.

Creating Your GPS Hunt
Setting up GPS clues is easy. When you’re first creating your hunt you simply make sure the hunt is “Geolocation Based.” From there you’ll just add clues like normal with a clue name and description.

To set the GPS coordinates for an individual clue you’ll click on the gear icon to access the clue’s settings. There you can either search for the location or add the exact coordinates yourself. Then whenever you’re ready, just place the QR codes at each location.

Remember, your event is what you make it, but Eventzee is here to make it as easy on you as possible. To get a more in depth look at setting up Eventzee hunts or how to play Eventzee check out the following guides.

Now that you have some ideas about how to start your Eventzee scavenger hunt, go out and make it happen! If you’re interested in hosting an Eventzee event, sponsoring an official Eventzee photo hunt or just curious about what we can do, contact us at eventzee@munzee.com.