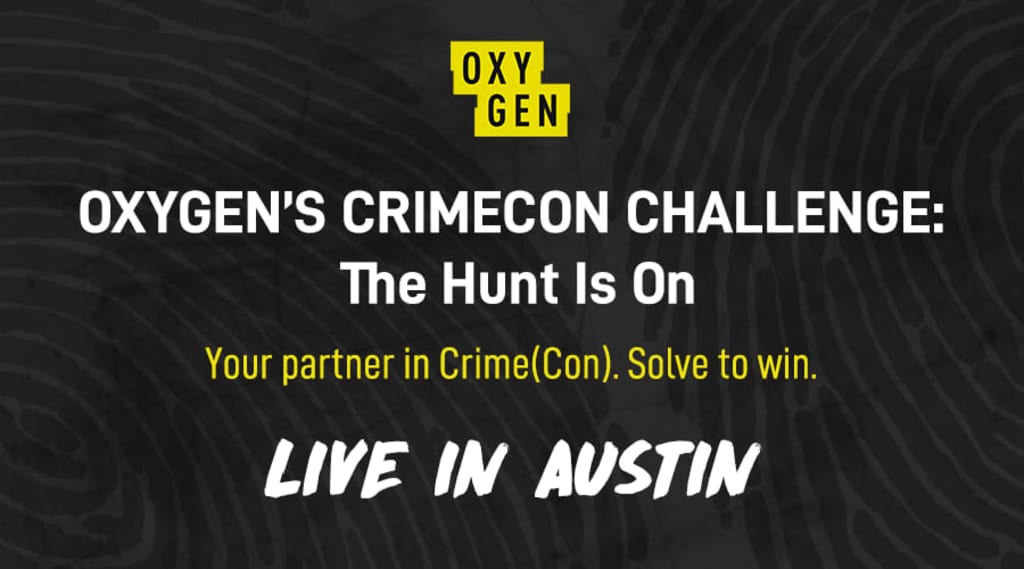 In June 2021, the Eventzee team created and launched a special scavenger hunt for CrimeCon, a true crime convention in Austin, Texas. Utilizing Eventzee technology, Oxygen’s CrimeCon Challenge: The Hunt is On offered both in-person conference participants and virtual attendees the opportunity to test their knowledge of true crime, interacting with convention vendor booths or virtual spaces, and solving mysteries to win prizes!

There were two CrimeCon hunts attendees could join — the Austin hunt and the Virtual hunt. The former was for attendees at the in-person event in Austin, TX from June 4-6, while the latter was for those who had signed up for Virtual Access Badges.

“We were excited to be part of an event as highly anticipated as CrimeCon,” said Craig Holland, CEO of Freeze Tag. “As fellow fans, our team enjoyed working with CrimeCon staff to create an event designed to engage true crime followers.”

Both hunts featured photo, video, text, and quiz challenges. They also featured QR Code challenges tailored to each event. Through text and quiz challenges, players were tested on shows in Oxygen’s roster, such as Cold Justice and Snapped, and also on more general facts relating to true crime. Many of these challenges also included clips from the popular shows using Eventzee’s video hosting feature.

Meanwhile, through photo and video challenges, players were invited to step into the role of detective, socialize with other attendees, and more. These challenges encouraged players to get creative and offered CrimeCon great content for sharing the convention’s experiences.

For those who love solving murder mystery puzzles, a special QR code game was created. Attendees were tasked with tracking down hidden QR code “fingerprints” hidden throughout the event space, or in digital spaces, in order to solve a fictional crime. As each code was scanned players were awarded “letters” in the My Badges section of the app. Each QR code revealed a new letter and players had to solve for the name of the culprit by unscrambling all of the letters.

If you’re interested in hosting an Eventzee scavenger hunt visit our website and contact our team to set up the best package for you. You can also email us at sales@eventzeeapp.com or call us at 714-210-3850 x15. Eventzee is ideal for trade shows, conferences and orientations. Businesses can use the app to drive traffic to specific locations, promote vendors or products and increase social interactions, while observing appropriate social distances. Some clients use Eventzee to hold contests and give away prizes to their most engaged customers. There are many ways Eventzee can help you achieve your business goals. For more information visit https://www.eventzeeapp.com/.

About CrimeCon
From the latest cases to the latest scientific techniques. From the newest TV shows and docs to the best podcasts in the world. And from deep-dives into topics you didn’t even know existed to big ballroom sessions with personalities you watch every week—CrimeCon is the platform that delivers it all.

CrimeCon events are equal parts education and experience. Organizers curate a wide-ranging program that has something for everyone and that combines hands-on learning with plenty of chances to have fun meeting speakers, podcasters, and other fans.

About Oxygen
Oxygen is a multiplatform crime destination brand for women. Having announced the full-time shift to true crime programming in 2017, Oxygen remains one of the fastest growing cable entertainment networks with popular unscripted original programming that includes the flagship “Snapped” franchise, “Cold Justice,” “Killer Couples,” “Criminal Confessions,” and breakout hit event series such as “The Disappearance of Natalee Holloway,” “Dahmer on Dahmer: A Killer Speaks,” and “Aaron Hernandez Uncovered.” Available in more than 77 million homes, Oxygen is a network of NBCUniversal Entertainment & Lifestyle Group, a division of NBCUniversal, one of the world’s leading media and entertainment companies in the development, production, and marketing of entertainment, news and information to a global audience. Watch Oxygen anywhere: On Demand, online, or across mobile and connected TVs.